Smith Built staying on top of the latest in Metal Roofing news and events. 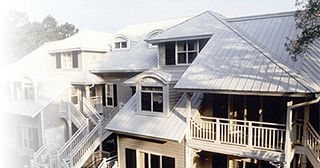 The study found that energy savings are most strongly influenced by the solar reflectance of roof materials. The study proves dark gray roofs reflect a mere eight percent of the heat associated with sunlight, while white shingle and terra cotta tile roofs reflect 25 and 34 percent, respectively. White metal and cement tile roofs provide the most dramatic results, reflecting 66 to 77 percent of the sun's energy.

"The results of the study clearly demonstrate that white, galvanized metal roofing material saves the most energy as a result of its high reflectance and superior ability to cool quickly at night," said Craig Muccio, Conservation Program Evaluation Coordinator, for FPL.

A white, galvanized metal roof should save a customer who lives in an average-size 1,770 square foot home approximately $128 or 23 percent annually in cooling costs, compared with a dark gray shingle roof on the same home. For the same size home, white, S-shaped cement tile produces the second-best savings of $110 or 20 percent of annual cooling costs followed by white, flat cement calculated at $96 per year for a 17 percent savings compared to the dark gray shingles. White shingled roofs trim $24, or about four percent off the annual cooling bill, while terra cotta S-shaped cement tiles net a modest $15, or three percent compared to dark gray shingles.

"Choosing a roof for a home, whether it's a new home or a replacement roof, is a major decision for most homeowners," Muccio said. "The purpose of this study is to provide homeowners with additional information to help them make the best, most informed decision. Every little bit we do to help our customers stay informed should ultimately conserve energy as well as save them money."